DURHAM, N.C. – As a federal agency re-opens the door to predatory payday lending for some banks, scores of groups representing a broad cross-section of Americans are saying “not so fast.” Advocates are mailing hard copies of an open letter to banks and regulators, and faith leaders are delivering the letter directly to bank branches, some where the congregations hold their accounts. The letter, which urges the banks to pledge not to start making payday loans, was coordinated by the Stop the Debt Trap campaign and is signed by 230 faith groups, consumer advocates, and civil rights organizations. 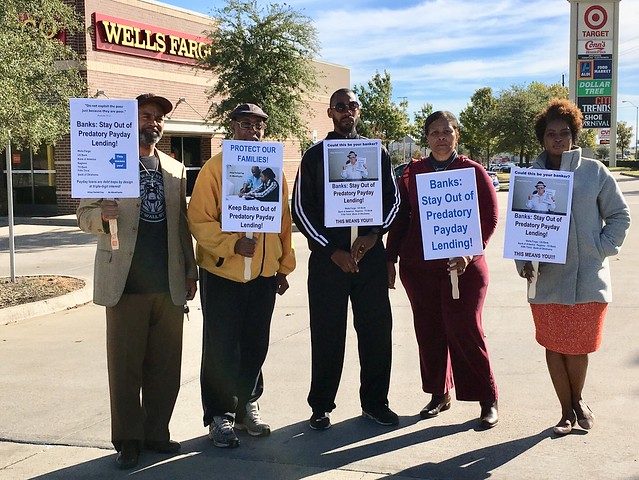 In October, the Office of the Comptroller of the Currency (OCC) rescinded its 2013 guidance that curbed predatory bank payday loans. The OCC’s rollback of guidance on “deposit advance” loans, which are toxic 300% APR payday loans, will make it easier for banks to make loans designed to trap customers in debt, including older Americans who receive social security. On October 6, the day following the OCC’s announcement, over a hundred groups sent the OCC a copy of a letter urging banks to pledge that they will not start making payday loans. Since then the number of groups expressing their concern has more than doubled.

“Members of our churches and residents in the community are financially held hostage by these ‘loans.’ They confess that in a situation of desperation they have sought out loans that eventually became traps. They made payments, every other week or monthly, only to get deeper in debt. They were in a financial hole and upon getting a payday or car title loan, received a shovel instead of a rope,” said Rev. Dr. Haynes, senior pastor of Friendship-West Baptist Church. “I am especially appalled by the harm done to communities of color that have been historically exploited and suffer from a lack of economic opportunity. Payday loan borrowers are disproportionately African American. The research reveals, sadly, that payday lenders target these disadvantaged communities. This predatory industry adds to the problem of the racial wealth gap in this nation.”

“We let Wells Fargo know in no uncertain terms that we will not accept any plan they may have to move back into this predatory market. We want access to credit, but it must be quality credit. Anything less adds to the stress of the desperate and needy,” continued Rev. Haynes. “This is a depraved business model. Banks risk another round of hits to their reputations if they dare to stoop to the level of loanshark payday lenders and begin trapping their customers in debt trap loans once again.”

“For me, it is immoral to offer a product to hurting poor and vulnerable people that only further hurts and harms them under the pretense of helping them,” said Rev. Carolyn Foster, Faith in Community Coordinator at Greater Birmingham Ministries. “Predatory lending is a trap that is next to impossible to be freed from.”

Rev. Foster joined Rev. Tommy Morgan of Christian Church (Disciples of Christ) in delivering the letter to the CEO of Regions Bank in Birmingham, Alabama. Regions Bank is one of those who had engaged in bank payday lending before the OCC issued its 2013 guidance, the FDIC issued the same guidance, and the Federal Reserve (which supervisions Regions) issued a cautionary supervisory statement.

Rev. Jerome Hurst of Southeast SDA Church in Cleveland, Ohio, delivered the letter to Fifth Third Bank. Fifth Third Bank was also making 300% payday loans prior to the 2013 regulatory intervention, and it continues to make payday loans at a lower, but still excessive, cost today.

“Listen, this is not ‘free money.’ Don’t fall prey to this trap. This is a game you’ll never win,” said Rev. Hurst. “I am committed to this issue until the shackles of payday lending are broken.”

“We will not go back to a time when major banks had license to trap their customers in debt no less predatory and harmful than any quick cash storefront predatory lender,” said Rev. Sekinah Hamlin, Director of Faith Affairs at the Center for Responsible Lending.

“I oppose predatory lending because it preys on vulnerable people. They are often among the hardest working, yet poorest among us. This bitter irony belies the American Dream,” said Rev. Ebony Grisom of the Rhode Island State Council of Churches and Ecumenical Poverty Initiative, who delivered the letter to TD Bank in Rhode Island. “I join other people of faith by going to large, commercial banks to ‘Speak out for those who cannot speak...to defend the rights of the poor and needy.’ (Proverbs 31:8a,9c, New Revised Standard Version).”

In 2011, the Center for Responsible Lending (CRL) documented that the median bank payday borrower had 13.5 loans per year and was in debt at least part of six months annually. And in 2013, the CFPB found that borrowers spent an average of 114 days during the year in triple-digit debt. CRL also found that more than half of borrowers had more than ten loans annually, 12% had more than 30 loans annually, and that a quarter of the loans went to bank customers who receive social security. Banks were siphoning $500 million per year from struggling customers.

After an outcry by community and civil rights organizations, faith and military leaders, and many state and federal lawmakers, the OCC and FDIC instructed the banks they supervise to assess their customers’ ability to pay back the loans without falling into a cycle of debt. Rather than do that, the banks generally withdrew from the market. Without the guidance, the banks overseen by the OCC may again attempt to trap their customers in unaffordable debt.

For more information, or to arrange an interview with a CRL spokesperson on this issue, please contact Carol Hammerstein at carol.hammerstein@responsiblelending.org.