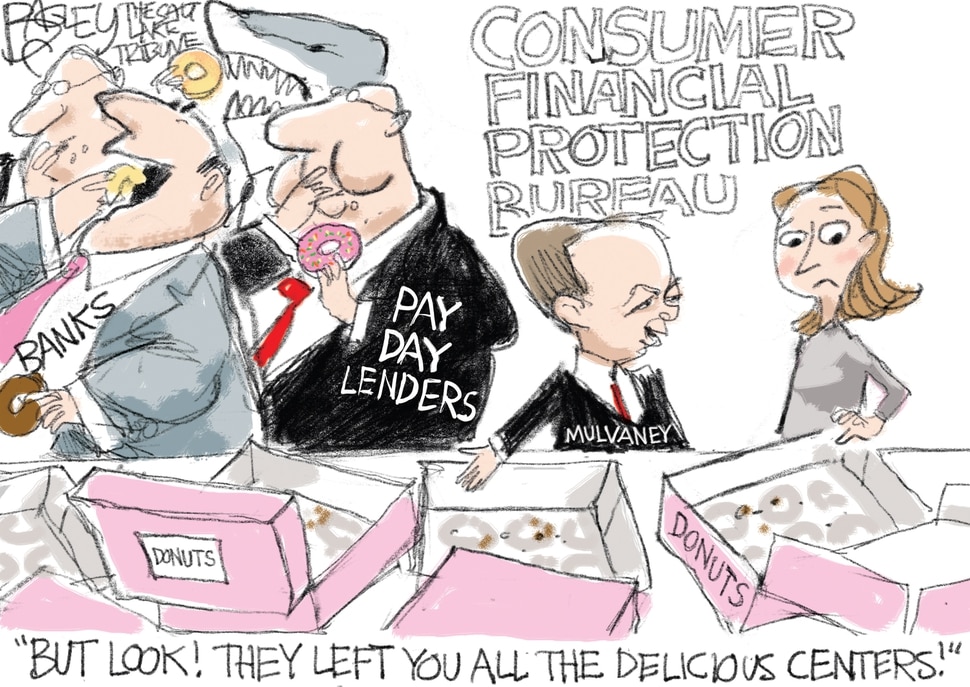 WASHINGTON, D.C. – Mick Mulvaney, who was unlawfully named as Acting Director of the Consumer Financial Protection Bureau (CFPB), has been excoriated by news outlets for his disturbing ties to the exploitative payday lending industry. His cozy relationship is especially concerning as the CFPB will be charged with implementing its recently issued consumer protections against payday loan debt traps.

“One of industries the CFPB has sought to protect consumers from is the payday loan industry, whose members issue short term loans to consumers at exorbitant interest rates. Mulvaney’s record with the industry, including his comments at a 2014 Congressional hearing, shows a concern for lenders often described as predatory.

“As a Congressman, Mulvaney accepted $55,500 in contributions from payday lenders during his four successful runs for Congress, including $26,600 during the 2016 election cycle, according to the National Institute on Money in State Politics….

“In a 2014 hearing,…. [p]refacing a question to Cordray on ‘payday loans’ and ‘certain types of installment loans,’ Mulvaney’s comments suggest a deference to payday lenders.

“‘I share your understanding that small-dollar lending serves an important function for many borrowers, especially those who may not utilize traditional banking services, and hope the Bureau will work to ensure the continued viability and availability of these products,’ Mulvaney said.

“The comments came just two months before a CFPB report found four out of five payday loans are rolled over or renewed after two weeks, and that the the majority of payday loans are renewed so many times that borrowers pay more in fees than the loan was originally worth.

“The South Carolina congressional district he represented from 2011 to 2017 is located just a 30-minute drive from the national headquarters of Advance America, the ‘largest non-bank provider of cash advance services in the United States’ according to SEC filings.”

“Even for this phony populist president, who instead of draining the swamp stocked his White House and Treasury Department with Goldman Sachs executives and sprinkled billionaires and lobbyists across the government, the move on the CFPB is brazen. That’s because Trump’s legal justification for taking control of the CFPB was written by a lawyer who until just a few months ago was defending a foreign payday lender against the agency’s attempts to punish it for lending abuses.

“As the Intercept’s David Dayen reported, Steven Engel, the Justice Department lawyer who wrote the memo justifying Trump’s takeover, was a lead counsel for Canadian payday lender NDG Financial, which the CFPB cited for misleading and overcharging U.S. customers. The Intercept reported that Engel was active in the case, which remains in court, until August — after he was nominated to serve in the administration.

“It’s difficult to imagine something swampier than a corporate lawyer joining the government and then orchestrating the disarming of a federal agency in litigation with his former client. NDG — and the lenders who had to give back some $12 billion to consumers because of shady practices caught by the CFPB — can celebrate.”

A payday lender selling loans derided as “debt traps” by the Consumer Financial Protection Bureau is going public — and it’s banking on the Trump administration going easy on it.

Curo Group, a company that charges nearly 1 percent interest a day for some of its loans, is looking to raise $123 million in an initial public offering on the New York Stock Exchange — valuing the company at more than $700 million.

The IPO filing comes just days after Richard Cordray resigned from the CFPB, an agency that was hostile to the industry and just last month issued a rule to curb abusive loans.

The company, which does business under the Speedy Cash and Rapid Cash nameplates in the US, is betting that the next head of the consumer watchdog won’t go so hard on it.

“Even though the CFPB Rule has been approved as a final rule, it is possible that the CFPB Rule will not become effective in its current form,” the company wrote in its regulatory filing on Wednesday.

Payday loans, which are outlawed in 15 states, including New York, as well as in Washington DC, typically charge sky-high rates for short-term cash advances.

Last month, the CFPB issued a study that derided payday loans as “debt traps” that caused four out of five people to borrow higher amounts just to pay back what they originally owed.

The CFPB also recommended limits on the amounts that money lenders can extend to their cash-strapped borrowers.

The company, in its 215 US and 190 Canadian locations, offers unsecured installment loans and charges an average of 13.2 percent interest per month, it said in the filing.

On secured loans, the rate drops to an average of 10.6 percent a month.

Open-end loans, which act like lines of credit, carry interest rates of up to 0.99 percent per day, it said.

A fourth type of loan, which the company calls single-pay — usually for a small amount of cash after the borrower hands over a post-dated check — carries fees of up to 25 percent.

Single-pay loans made up 28 percent of Curo Group’s business in the nine months that ended on Sept. 30.

Despite the high interest rates and fees, Curo Group apparently has no trouble attracting business: Revenues increased 14.2 percent in the nine months ended Sept. 30 compared with the previous year.

Whoever the next CFPB director is, Curo believes that its prospects are good under the current Congress.

The “CFPB Rule remains subject to potential override by disapproval under the Congressional Review Act,” the company said, noting that Congress had voted down an arbitration rule that was put forth by the CFPB.

“Moreover, the current CFPB Director announced his resignation, effective as of Nov. 24, 2017. His successor could suspend, delay, modify or withdraw the CFPB Rule.”

“The lawyer who wrote the Office of Legal Counsel memo supporting the Trump administration’s viewpoint that the president can appoint Mick Mulvaney as acting director of the Consumer Financial Protection Bureau represented a payday lender in front of the CFPB last year.

“Steven A. Engel wrote the memo for OLC, which has been criticized by academics for seeking a conclusion and working backward to justify it….

“Engel was confirmed as an assistant attorney general earlier this month by a voice vote in the Senate.

“But in July 2015, Engel was one of two lead counsels for NDG Financial Corp., a Canadian payday lender that CFPB cited for running a nine-year scheme to use its foreign status to offer U.S. customers high-cost loans that were at odds with state and federal law. ‘We are taking action against the NDG Enterprise for collecting money it had no right to take from consumers,’ said CFPB Director Richard Cordray at the time. Engel was active in the case up until August of this year.

“The revelation underscores the extent of industry infiltration of the structure designed by Congress — a single permanent director who can only take office upon appointment by the president and confirmation by the Senate — to keep the consumer watchdog independent of the industry it is set up to regulate and buttresses the original intent of the lawmakers who established the agency.

“CFPB alleged that NDG, which issues and collects payday loans online, made ‘false threats’ to consumers that non-payment would result in wage garnishment, arrest, or imprisonment. The web of companies in the enterprise, situated in Canada and Malta, did not have the legal right to debit accounts to collect payday loans in the U.S., but they hid behind their foreign status to claim that they were exempt from various limitations and statutes. The case is still active in federal court in New York.

“Engel represented the defendants in the case against CFPB as recently as this August, when U.S. District Judge Colleen McMahon asked judges in Canada to compel testimony from Canadian banks. At the time, Engel was a partner at the law firm Dechert. He was nominated to become an assistant attorney general for OLC in February of this year.

“Having a former adversary to CFPB weigh in on who is the legal acting director of the agency raises questions over Engel’s independence and potential conflict of interest….

“The Justice Department did not respond to a request for comment about Engel and whether he should have recused himself from matters involving the CFPB.”

“And as a candidate for Congress, Mulvaney accepted campaign contributions from groups with business before the CFPB, including credit union trade groups and the association representing payday lenders….

“During his tenure in the House, Mulvaney:

“As a member of Congress, Mulvaney also accepted thousands of dollars in campaign contributions from companies and associations with business before the CFPB.

“For instance, Mulvaney accepted $12,000 from Wells Fargo during the past three election cycles, according to the Center for Responsive Politics, which compiles campaign contribution reports.

“The agency has fined Wells Fargo $100 million for its widespread practice of opening bank accounts without customers’ knowledge.

“Both groups have complained that the CFPB, in its rulemaking, has failed to distinguish between large banks that caused the financial crisis and credit unions that have not.

“And he received $10,000 from the Community Financial Services Association, which represents the payday lending industry.

“That association has left open the possibility that it may file suit against the agency over final rules, which they say will unfairly inhibit their ability to make short-term rules….

“[Senator] Warren has raised questions about OMB staff serving on an interim basis at the CFPB and about other potential conflicts of interest.

“For instance, in a letter to Mulvaney and White House Counsel Don McGahn, Warren pointed out that CFPB rules prohibit employees from owning any security in any entity supervised by the bureau.

“The rules also require employees to confirm divestiture in writing within 30 days of employment, she said.”